Indoor localization has been studied for nearly two decades fueled by wide interest in indoor navigation, achieving the necessary decimeter-level accuracy. However, there are no real-world deployments of WiFi-based user localization algorithms, primarily because these algorithms are infrastructure dependent and therefore assume the location of the Access Points, their antenna geometries, and deployment orientations in the physical map. In the real world, such detailed knowledge of the location attributes of the access point is seldom available, thereby making WiFi localization hard to deploy. 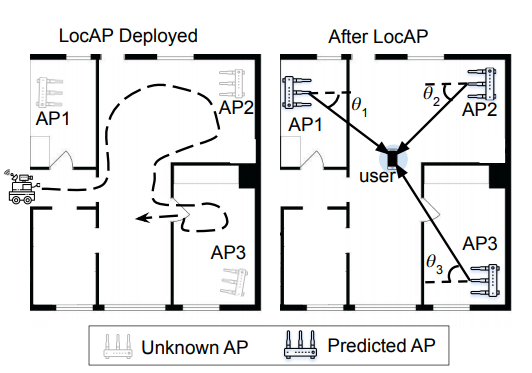 LocAP is an autonomous system to physically map the environment and accurately locate the attributes of existing wireless infrastructure in the physical space down to the required stringent accuracy of 3 mm antenna separation and 3 degree deployment orientation median errors, whereas state-of-the-art algorithm reports 150 mm and 25 degree respectively.

LocAP is deployed on an autonomous bot which hosts a Lidar and a WiFi client. The bot moves around in a specific path and builds indoor maps using standard SLAM algorithms. Concurrently, the WiFi client on the bot collects channel state information (CSI) data from existing access points and run a novel algorithm on this data to estimate the access point attributes– location, orientation, and antenna placement.