Spectrum usage has evolved over many decades, shaped by both state-of-the art technological progress and the intended use cases. Over the last few years, usage of wireless spectum has become increasingly fragmented and congested. The rapid adoption of new and complex protocols such as LTE and 5G-NR with along with existing legacy systems like FM Radio and Defense wireless deployments have uncovered challenges in spectrum allocation, regulation and monitoring. Adoption of spectrum sharing standards such as CBRS signal a future where the usage of wireless spectrum needs to be strictly monitored and regulated to maximize utilization while being secure and tolerant to faults. To this end, there is a need of a sensing entity to extract valuable information from the wireless spectrum for a variety of use cases.

An ideal spectrum sensing entity would have an oracular view of spectrum usage. However, implementing such a system is challenging due to the highly dynamic nature of spectrum usage. These dynamics present themselves in the time domain, as fleeting signals of the order of ms, and in the frequency domain where a multitude of signals and protocols are crammed into ever-more-congested bandwidth. Added to this, the nature of usage varies from place to place, depending on density of users, terrain and even weather. Our current thrust in this direction is in designing and building novel spectrum sensing architectures that can scale to next-generation wireless networks and their requirements.

Our architecture SweepSense, combines sweep-frequency downconversion with simultaneous sampling and achieves large bandwidth, high-time resolution sensing. Through our work, we show that SweepSense can be implemented on existing radios with minimal cost overheads, and provides promising performance over state-of-art. 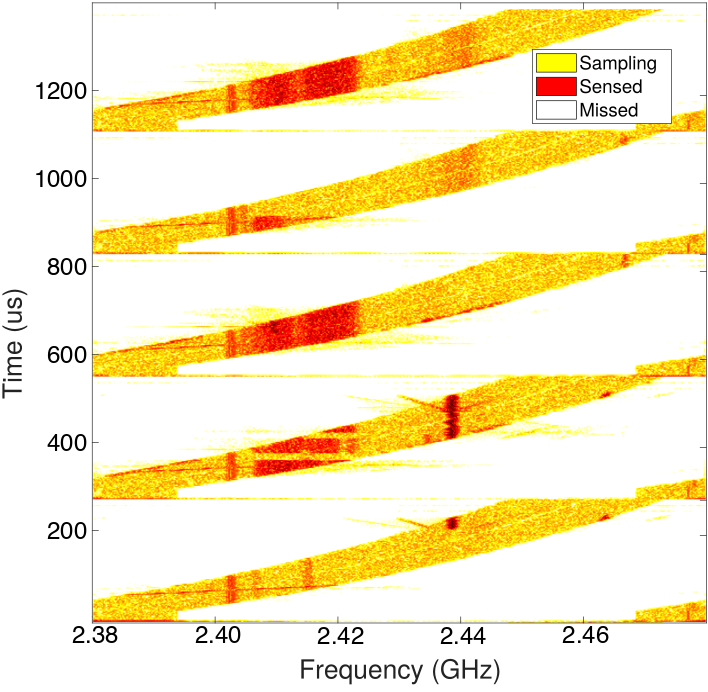 SweepSense spectrogram of the 2.4 GHz ISM band showing WiFi and Bluetooth transmissions. 100 MHz bandwidth available with only a 25 MSps radio.

We also investigate orchestration, networking and data management of spectrum sensor deployments. A sensor that can observe large amounts of spectrum will also generate large amounts of data that comes with the cost of backhaul and storage capacity. We show that powerful spectrum sensors can be deployed on low bandwidth backhaul by exploiting the sparsity in the spectrum to compress the information captured. Our algorithm, SparSDR, uses Overlapped Fourier Transform based compression to allow sparsity proportional scaling of backhaul bandwidth. 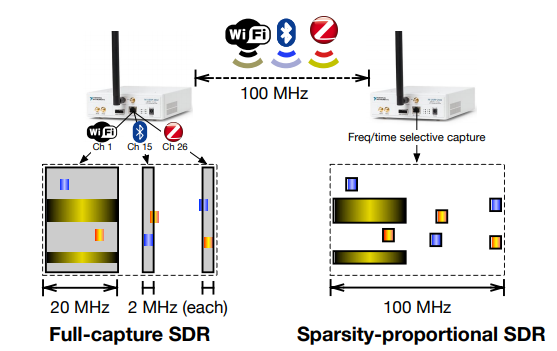 We present SparSDR, a resource-efficient architecture for softwaredefined radios whose backhaul bandwidth and compute power requirements scale in inverse proportion to the sparsity (in time and frequency) of the signals received. SparSDR requires dramatically fewer resources than existing approaches to process many popular protocols while retaining both flexibility and fidelity. We demonstrate that our approach has negligible impact on signal quality, receiver sensitivity, and processing latency. The SparSDR architecture makes it possible to capture signals across bandwidths far wider than the capacity of a radio’s backhaul through the addition of lightweight frontend processing and corresponding backend reconstruction to restore the signals to their original sample rate. We employ SparSDR to develop two wideband applications running on a USRP N210 and a Raspberry Pi 3+: an IoT sniffer that scans 100 MHz of bandwidth and decodes received BLE packets, and a wideband Cloud SDR receiver that requires only residential-class Internet uplink capacity. We show that our SparSDR implementation fits in the constrained resources of popular low-cost SDR platforms, such as the AD Pluto. 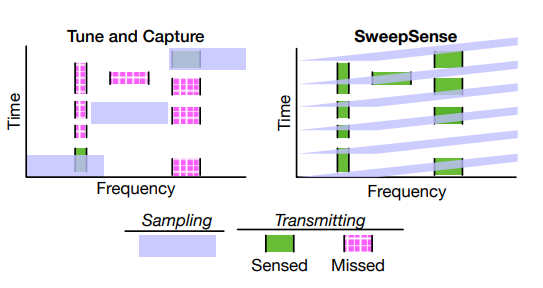 Wireless transmissions occur intermittently across the entire spectrum. For example, WiFi and Bluetooth devices transmit frames across the 100 MHz-wide 2.4 GHz band, and LTE devices transmit frames between 700 MHz and 3.7 GHz). Today, only high-cost radios can sense across the spectrum with sufficient temporal resolution to observe these individual transmissions. We present “SweepSense”, a low-cost radio architecture that senses the entire spectrum with high-temporal resolution by rapidly sweeping across it. Sweeping introduces new challenges for spectrum sensing: SweepSense radios only capture a small number of distorted samples of transmissions. To overcome this challenge, we correct the distortion with self-generated calibration data, and classify the protocol that originated each transmission with only a fraction of the transmission’s samples. We demonstrate that SweepSense can accurately identify four protocols transmitting simultaneously in the 2.4 GHz unlicensed band. We also demonstrate that it can simultaneously monitor the load of several LTE base stations operating in disjoint bands.