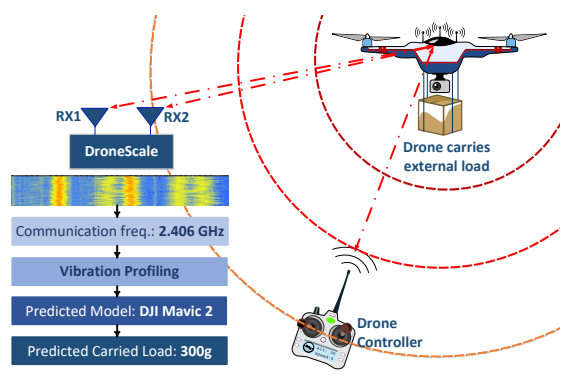 Drones have carried weapons, drugs, explosives and illegal packages in the recent past, raising strong concerns from public authorities. While existing drone monitoring systems only focus on detecting drone presence, localizing or fingerprinting the drone, there is a lack of a solution for estimating the additional load carried by a drone. In this paper, we present a novel passive RF system, namely DroneScale, to monitor the wireless signals transmitted by commercial drones and then confirm their models and loads. Our key technical contribution is a proposed technique to passively capture vibration at high resolution (i.e., 1Hz vibration) from afar, which was not possible before. We prototype DroneScale using COTS RF components and illustrate that it can monitor the body vibration of a drone at the targeted resolution. In addition, we develop learning algorithms to extract the physical vibration of the drone from the transmitted signal to infer the model of a drone and the load carried by it. We evaluate the DroneScale system using 5 different drone models, which carry external loads of up to 400g. The experimental results show that the system is able to estimate the external load of a drone with an average accuracy of 96.27%. We also analyze the sensitivity of the system with different load placements with respect to the drone’s body, flight modes, and distances up to 200 meters.

Autonomous perception requires high-quality environment sensing in the form of 3D bounding boxes of dynamic objects. The primary sensors used in automotive systems are light-based cameras and LiDARs. However, they are known to fail in adverse weather conditions. Radars can potentially solve this problem as they are barely affected by adverse weather conditions. However, specular reflections of wireless signals cause poor performance of radar point clouds.We introduce Pointillism, a system that combines data from multiple spatially separated radars with an optimal separation to mitigate these problems. We introduce a novel concept of Cross Potential Point Clouds, which uses the spatial diversity induced by multiple radars and solves the problem of noise and sparsity in radar point clouds. Furthermore, we present the design of RP-net, a novel deep learning architecture, designed explicitly for radar’s sparse data distribution, to enable accurate 3D bounding box estimation. The spatial techniques designed and proposed in this paper are fundamental to radars point cloud distribution and would benefit other radar sensing applications.

Beamforming methods need to be critically evaluated and improvedto achieve the promised performance of mmWave 5G-NR in highmobility applications like Vehicle-to-Everything (V2X) communi-cation. Conventional beam management methods developed forhigher frequency applications do not directly carry over to the 28GHz mmWave regime, where propagation and reflection character-istics are vastly different. Further, real system deployments and testsare required to verify these methods in a practical setting. In thiswork, we develop mMobile, a custom 5G-NR compliant mmWavetestbed to evaluate beam management algorithms. We describe thearchitecture and challenges in building such a testbed. We then cre-ate a novel, low-complexity beam tracking algorithm by exploitingthe 5G-NR waveform structure and evaluate its performance onthe testbed. The algorithm can sustain almost twice the averagethroughput compared to the baseline. 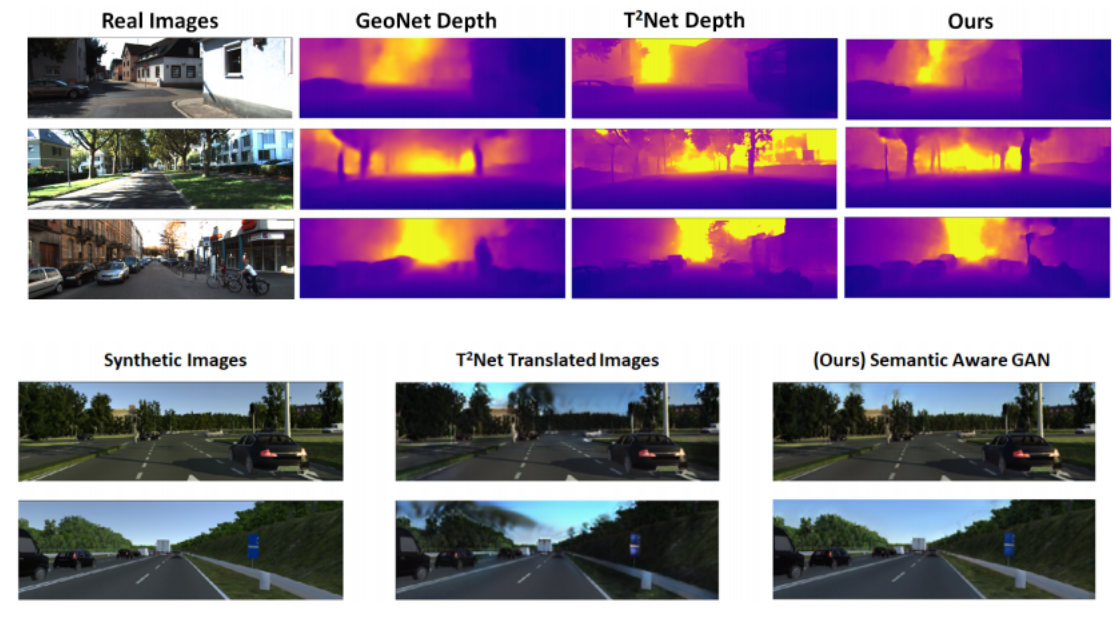 Solving depth estimation with monocular cameras enables the possibility of widespread use of cameras as low-cost depth estimation sensors in applications such as autonomous driving and robotics. However, learning such a scalable depth estimation model would require a lot of labeled data which is expensive to collect. There are two popular existing approaches which do not require annotated depth maps: (i) using labeled synthetic and unlabeled real data in an adversarial framework to predict more accurate depth, and (ii) unsupervised models which exploit geometric structure across space and time in monocular video frames. Ideally, we would like to leverage features provided by both approaches as they complement each other; however, existing methods do not adequately exploit these additive benefits. We present S 3Net, a selfsupervised framework which combines these complementary features: we use synthetic and real-world images for training while exploiting geometric, temporal, as well as semantic constraints. Our novel consolidated architecture provides a new state-of-the-art in self-supervised depth estimation using monocular videos. We present a unique way to train this self-supervised framework, and achieve (i) more than 15% improvement over previous synthetic supervised approaches that use domain adaptation and (ii) more than 10% improvement over previous self-supervised approaches which exploit geometric constraints from the real data 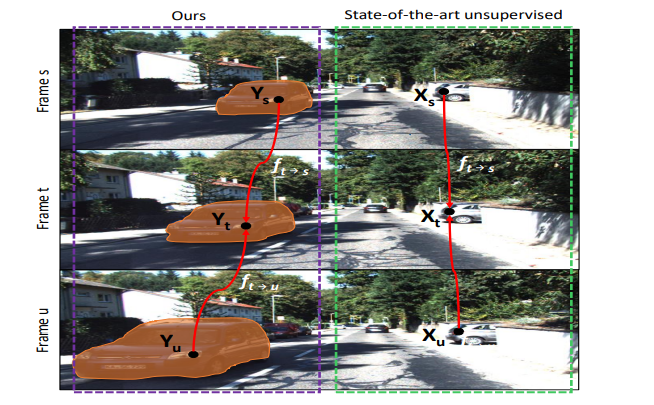 Unsupervised learning for geometric perception (depth, optical flow, etc.) is of great interest to autonomous systems. Recent works on unsupervised learning have made considerable progress on perceiving geometry; however, they usually ignore the coherence of objects and perform poorly under scenarios with dark and noisy environments. In contrast, supervised learning algorithms, which are robust, require large labeled geometric dataset. This paper introduces SIGNet, a novel framework that provides robust geometry perception without requiring geometrically informative labels. Specifically, SIGNet integrates semantic information to make depth and flow predictions consistent with objects and robust to low lighting conditions. SIGNet is shown to improve upon the state-of-the-art unsupervised learning for depth prediction by 30% (in squared relative error). In particular, SIGNet improves the dynamic object class performance by 39% in depth prediction and 29% in flow prediction. Our code will be made available online